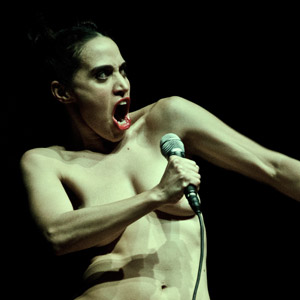 The 2012 multi-award winning Fringe First hit returns to Summerhall. A ‘young’, ‘ugly’ and literally naked woman reveals her bulimic, revolting and public secrets as she struggles with obstinacy, resistance and courage for her own celebrity breakthrough in the society of Thighs and Liberty.

"Howl of human emotion makes for unforgettable theatre. A near-perfect recreation of humanity, and indeed, society at its most powerful, most desperate, most vulnerable and most cutting"

"A piece so literally and metaphorically naked, raw and angry that you leave the theatre feeling as if you've had all your skin scraped off"

"Devastating stream of consciousness. One of the most wonderful full on performance ever seen in Edinburgh Festival. Are you brave enough to spend one hour with Gallerano?"