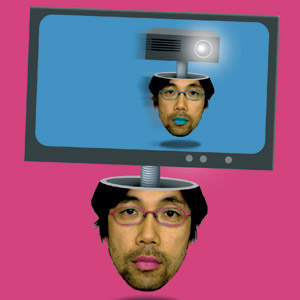 Inspired by Swan Lake and Star Wars, Projector/Conjector playfully references dance and mechanics of theatre. With a video projector and TV attached to their heads, two creatures called Projector and Conjector meet and fall in love, dancing through screens.

"Projector/Conjector is a love story ... but not like any other...Through images and words they reveal/project, ... a bonkers story emerges...It's a kind of sci-fi Swan Lake tragi-comedy, and as well as being absurdly hilarious, it's also very sweet."

"...dance is referenced in a beautifully techno-cuckoo way. It's a piece about outer space and inner desires, tragic love and a literally bloody lake of swans, It's also charmingly dead-pan, witty and inventive."