Building on last year’s multi award winning programme Summerhall is full of surprises this Festival. From cutting edge art to extraordinary, risk taking theatre, dance and performance. There’s plenty to do and see. Or simply soak up Edinburgh’s unique Festival atmosphere in our bars and café. We look forward to seeing you! Edinburgh's own übertrio s i n k curate a showcase of their recent work. Who knows what will happen?

The world premier of 'Moko and Loupe', a masterful comic short film by Adrian Hornsby, with a score devised and performed live? for sure.

'Dissection Bar', a tune conceived during an improvised performance in Summerhall two summers ago, featuring the infamous Tim Lane on tuned percussion? - quite probably.

Lyrical, visceral, ecstatic sound like you've never heard before, weaved together by an accordion, sax and violin? Turn up to find out. 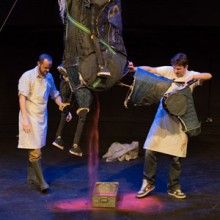 For Their Own Good

Can the way we kill animals tell us anything about how we deal with our own demise? In a former veterinary demonstration room, two knackermen investigate the pitfalls of being high up the evolutionary chain. Combining beautiful puppetry, new writing and documentary material this show tells a moving and darkly comic tale about the only certainty in life. Death, how it’s become removed from us as a process, how maybe we should reclaim it. A transcription of Krzysztof Penderecki’s compositions performed by An On Bast (live electronics) and Maciej Fortuna (trumpet, live electronics) is a fresh and daring take on musical motifs. The duo is accompanied by VJ Pillow’s visuals inspired by images from the films for which Penderecki composed, creating a unique multi-media experience.

The Pocket of Resistance is a construct of John Berger's which informed Begg's 2012 album, Dirt On Earth, and this rare solo outing for Begg forms a suitably skewed contribution to Summerhall's celebration of this extraordinary man.

Presented by the Polish Cultural Institute and Summerhall. A reconnaissance mission into the no man’s land where death borders with storytelling. From Presbyterian silence to the colour of the Día de Muertos, Story’s End surveys the gamut of death, and the tales we tell about it. Live music, film and spoken word brought together by folk noir pioneers The Dead Man’s Waltz, alongside a host of award-winning collaborators.